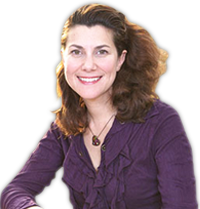 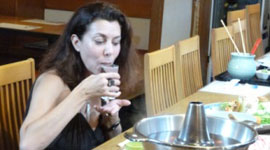 One of the surprises of this shooting, was to discover how Shochu matches very well with different kinds of food. And it is also so much fun do decide to drink it this way or that way according to the dish. And of course, to decide which Shochu to drink.

It can go with cuisine as diverse as white fish, meat, and spicy food but also with very elegant refined Japanese cuisine. Although I must say the best for me was the mariage between the dark pork meat Shabu Shabu prepared in a divine way by the master… and the Imo-Shochu Oyuwari (with hot water). Excellent!

But I am French!! And to my great pleasure, Shochu and Awamori can match also with some cheese such as Brie or camembert. A “fromage avec Shochu”, that could be a good new trend in Paris!

It goes also very well with a quiche Lorraine or some mushrooms. In these cases, it is better to drink it straight, but at a cold temperature. Bon appétit!

After this shooting, I became a real fan of Shochu and now I drink it regularly, mainly on the rocks. 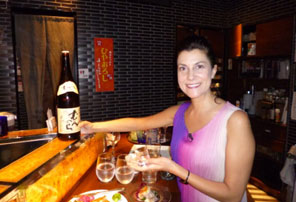 As a French wine lover (and connoisseur), I was eager to discover the world of Shochu, although completely different, but with a few common points.

The common point between wine and Shochu is that both can be enjoyed while eating. I had more the image of Shochu as an “apéritif” or “digestif” but it is a perfect drink to go along with your dinner. So before meal, after meal, or with meals, you have the choice. Is it a big difference compared to other spirits?

A higher alcohol degree than wine. Although it has quite a high degree of alcohol, it is a very delicate drink, with complex aroma and elegance. And contrary to wine, you can mix it with water, which makes it milder.

Once the bottle is opened, you can keep it for months and it still tastes perfect. And as far as the tasting is concerned, you cannot really compare the colour, but the aromas are very subtle. As for wine, it is nice to discover the Shochu first by its fragrance, its aroma. There are some fragrances you find in white wines or champagne. During the tasting (in the mouth), like wine, you have the different phases you can enjoy: the attack, the middle and the finish or even after taste. 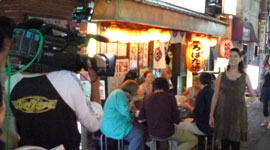 There are many great and fun places to drink shochu. Some very casual standing bars, some elegant dinner places, some nice Izakaya. And in fact, all kinds of people are shochu drinkers, among them many women.

Kaori, very charming shochu advisor, explained to me the basics of shochu. Merci! 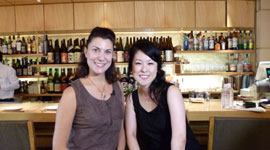 I used to drink it on the rocks and I did not know at all about the different kinds of ingredients that can be used to make shochu (not only Imo, sweet potato, as you will discover in the programme.)But the best way to know about the shochu world is to go to the real shochu’s birth place, in the island of Kyushu, and to see how it is made. Bon Voyage!

A few surprises during the filming:

First, there was a very strong typhoon coming right on Kagoshima in Kyushu exactly at the same time as us. Very impressive! Very frightening, but also the most beautiful clouds I have ever seen from an airplane. I really felt the strength and power of nature, which can give the best and the worst.

The making of shochu

Then, going to a brewery, I could see how, apart from the distillation process, the making of shochu is similar to wine. What I always love when visiting a winery is the nice smell of the grapes fermenting. A very special, very deep fragrance. This time, it was the sweet potatoes, Imo, fermenting smell that was enchanting.

And there was a big discovery for me during my visit at this brewery. I was able to see and touch the key material of making Shochu.
I even had a chance to enter to a special room… Check out the programme to find out my discovery! 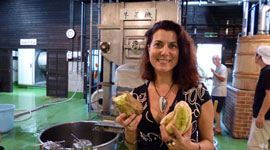 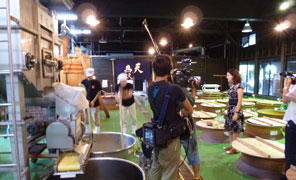 This year again the Sakura Grand Prix was attributed to a French film , The Other Son, and the director’s prize to Lorraine Lévy, for the first time in 25 years to a woman. The 5 members of the jury said they were completely unanimous about this decision. This film deals with the Identity question in a very difficult context , the israelo-palestinian relations. It is a very deep and very positive film. Bravo! 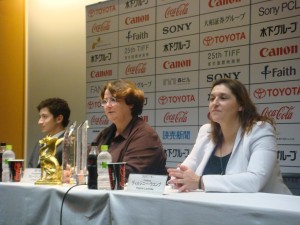 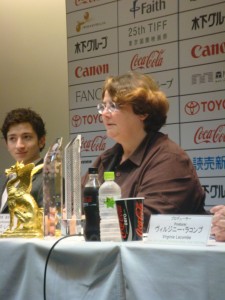 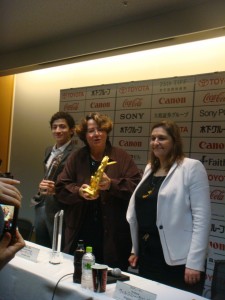 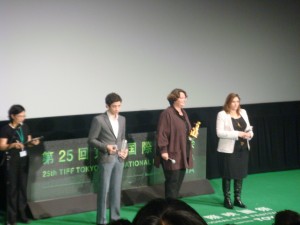 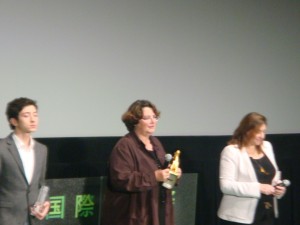 “Like a Mini-Paris – Living in Kagurazaka” in the January 2010 edition of Tokyo-Jin monthly magazine (Toshi Shuppan) on sale December 10,
2009 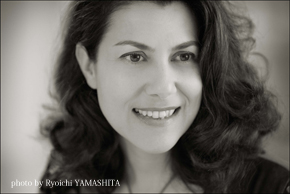 An international journalist living as a “bridge between France and Japan”
I was born in Paris and live now in Kagurazaka, Tokyo. Going back and forth between Paris and Tokyo, I am involved in a lot of different activities! I write articles and give talks covering a variety of areas, from personal themes like lifestyle and fashion, to women’s issues, city design, and how to balance life and work. I also have to admit a passionate love for wine and gourmet cuisine.

Dora Tauzin
［Background］
International journalist and essayist. After obtaining a master in Applied Foreign Languages from the Sorbonne, graduated from the Paris Institute of Political Studies (Sciences-Po) with recognition for outstanding academic achievement.
A citizen of the world, Dora is fluent in five languages and has also lived in Berlin, London and New York. After working in the Public Relations Department of the United Nations, she moved to Japan to host NHK Television’s “French Conversation” program for five years. She has also lectured at Keio University, and while currently a lecturer for organizations including the French Institute of Japan in Tokyo and the Academy of Wine, she is very active as a bridge between France and Japan, through many activities such as writing newspaper and magazine articles, as a charming host and speaker for lectures and other events. Dora also appears often on TV and radio as journalist and commentator as well.
Author of regular columns: “Dora’s stray cat Bonjour!” (2007-2008, Asahi Shimbun newspaper) and ” Column My Truth” (2009-2010, Tokyo Shimbun newspaper). Author of many books, including “Woman Before Mother” (Shogakukan) and “Live Your Own Life: Enjoy Today Parisian-Style!” (Kawade Shobo Shinsha).
Recipient of the Chief Secretary’s Award (Cultural Communications Division) from the Ministry of Culture.

» What are childcare and care for the elderly like in France? Japan, fight for love!
http://allabout.co.jp/gm/gc/384339/